Posted this on Suffocation last night and figured I would post it here as well(but seriously guys, I'll love you for eternity if you follow me). Read it before Pitchfork gets its grubby paws on the PRF releases. 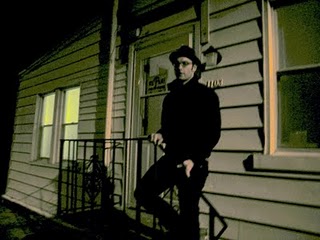 The new Puerto Rico Flowers single "3 Sisters", which came out on Valentine's Day is a taste of the full-length PRF album, 7, which will be released on Fan Death Records in May. Puerto Rico Flowers is ex-Clockcleaner vocalist and guitarist John Sharkey III. The Last.fm page describes PRF's sound as "not unlike a skinhead crying." And indeed, PRF is a tranquil, wizened meditation on youth, love, and sexuality. Sharkey's unique sound is the product of synthesizers, drums, and bass--and his voice takes center stage. Anyone who knows Clockcleaner will understand the the extent to which PRF is pared down--and Sharkey's ability to craft such a multifaceted sound with so few tools is a testament to his talent as a musician.

Sharkey has described the upcoming album as "a record for women", which seemed a tad bit comic when I first heard it. However, what this entails is a complex question--and upon listening to his releases so far, and the aforementioned "3 Sisters", the description is actually quite apt. The genius of Puerto Rico Flowers is the seamless marriage of an aloof, post-punk sound reminiscent of Ian Curtis or Michael Gira, with a warm, sentimental, crooner style. The track "Let's Make Friends", off PRF's 12" 4, is a dark, unsettling anthem--a story of darkness and desperate, human physicality. The synthesizer we know as a hallmark of more synthpop outfits like New Order or Depeche Mode suddenly morphs into something astoundingly dark and perhaps sinister. "Voice of Love" off the 12" 2, is a sweeping lamentation, carried effortlessly by an unwavering drumline, as if marching towards the end of the universe. Whereas "Let's Make Friends" is a story of lust and illicit sensuality--"Voice of Love" is an allegory of aging, and the passing of time. The philosophical "Voice of Love" seems like the natural predecessor to "Let's Make Friends." The two songs tell a story, of the emotional and the physical, the sacred and the profane.

"3 Sisters" begins with a strong drumline typical of Sharkey's PRF compositions, fatalistic and unfaltering. "3 Sisters" takes the omniscient narrative voice of "Let's Make Friends" and weaves a complex story, descending deep into the murky realm of familial relationships, and the juxtaposition of humanity in the line It's only human for you to break down your eyes and inhumanity, You were not mine, it's so inhuman, but that's how it goes, yes that's how it goes. The lyrics of "3 Sisters" are perhaps Sharkey's best, and unlike the removed style of "Voice of Love", the vocals in "3 Sisters" are grittier and delve deeper into questions of human nature.

Puerto Rico Flowers is often described as "goth-rock," which, though fairly accurate in capturing the nihilistic elements of Sharkey's sound--glosses over the warmth and sentimentality subtly contained within his compositions, and does not take into account the context of PRF's existence. Puerto Rico Flowers is, in a sense, a meditation on transition, transformation, and the evolution of sound as an expression of changes in one's personal life. Whereas Clockcleaner was known for their boundary-pushing antics onstage and their provocative lyrics (covering topics from sleazy sex to daddy issues), Puerto Rico Flowers has a coolness and maturity..."post-punk" in the most literal sense. The change in sound from Clockcleaner to PRF is mirrored by changes in Sharkey's personal life--the birth of his son and settling down in Philadelphia. Sharkey has stated that Puerto Rico Flowers is his last release before he retires from the world of music. And this sense of completion is intrinsic to PRF's sound, a bittersweet concoction of regrets and aspirations, and a solemn but enchanting farewell.